They say you should understand floating-point precision by 35.0000000000014. This post is here to help you: it discusses how floats are (im)precise and why, demonstrates the problems you inevitably encounter when doing math with floats, and presents ways to prevent those problems by using more proper data types and structures.

I'll jump straight into the demonstration, to get you all motivated. Imagine the following situation: I am binge-reading Twitter, and suddenly, among the flood of cute kitten videos, here comes a special offer: a fictitious uShop gives 10% off if you spend at least 0.8 credits. (Credits are, obviously, a pretty strong currency.)

This of course draws my attention. I click through to uShop and after a short while stumble upon the ideal product: the most recent uPad max with a smart case for a special price. And it all perfectly sums up to 0.8 which should grant me a 10% discount. 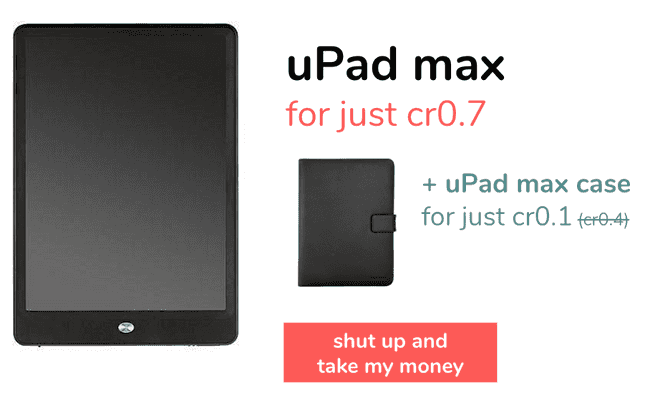 I don't hesitate for long. Until I find out that there is no discount. To add to my confusion, uShop tells me to spend another 0.0 credits. Huh? What's wrong?

You might have guessed it already: uShop is using floats.

The floating box of crap

Imagine a different situation: I am a uShop developer and receive a ticket about the obscure behaviour. I find it challenging and dive right into it, and soon become equally confused as the customer: What is the problem? I mean, if you put 0.7 + 0.1 to PHP console, it gives you the expected answer:

That's pretty weird. But okay, PHP is clearly flawed and I start persuading the management that we need to rewrite uShop in Node.js. I've wanted to try that for some time anyway. And JavaScript is so hip, they must do elementary-school maths right, right?

Um. Okay. At least JavaScript doesn't bullshit me like PHP did. But what the hell is going on?

What is a float?

The thing is you'd still end up with the same result if you rewrote uShop in pretty much any programming language since the very beginning of programming languages. The problem lies deeper, beyond languages, in how computers store data, particularly numbers. Let's start with a little theory of how numbers are represented in general.

Wikipedia says that floating-point arithmetic uses "formulaic representation of real numbers as an approximation," and goes on to explain the formula:

A number is, in general, represented approximately to a fixed number of significant digits (the significand) and scaled using an exponent in some fixed base. A number that can be represented exactly is of the following form:

What is a float to a computer?

With the high school recap done, let's see how those numbers are represented in computers. That is dictated by IEEE 754, a standard established in 1985 and followed by almost all computing technology ever since then.

IEEE 754 defines many different formats. The one most relevant to us is the double precision format, which is used by countless languages and virtual machines including PHP and JavaScript.

Double precision is a binary format - meaning that the base is 2 - that occupies 64 bits: with one for the signum and eleven for the exponent, 52 bits are left for the significand. One of its bits is encoded implicitly, so that's effectively 53 bits of information. What does it mean?

Perhaps the most important part is that double precision is a binary format. Since we've already revised our elementary and high school math skills, the only thing left is to remember those boring computer science classes at the university, and convert a decimal number 0.7 to binary.

It turns out that decimal 0.7 converts to binary 0.10(1100) recurring. In other words, the number doesn't have a finite binary expansion. Incidentally, the same applies to 0.1 which is converted to binary 0.0(0011) recurring. With the 53 bits the double precision format gives us, the representation has to be cut off at some point:

Those two long numbers are the closest values that a computer is capable of keeping in memory. They add up to a number that is slightly lesser than 0.8 - the difference doesn't manifest itself until the sixteenth decimal place, but it's there nonetheless.

Now we know what's wrong - and that it is not, in fact, wrong. But even though it's technically a feature, not a bug, it's a rather impractical one. Oh yes, there are use cases in which we want to gain performance at the cost of losing a tiny bit of precision (in games, for example). But there are many more where things are at stake, ranging from tax inspection fines when miscalculating money, to credibility in case of scientific research, to the lives of US soldiers in the Gulf War.

Unfortunately, PHP doesn't have a native API like, for instance, Java's BigDecimal, but there are two extensions that can be used for arbitrary precision math: GMP and BC Math. The latter is generally more usable (as in developer-friendly) while the former is presumably faster. But why even bother with choosing the best low-level solution when there are nice abstractions.

My favourite one is brick/math. Internally, it works with GMP or BC Math, whichever is available, or if none is available, it provides its own PHP implementation which basically uses the same algorithm as if you did the math on paper. Publicly, it exposes an API not unlike that of Java, which is a well-thought one:

It provides three classes for three different use cases: one for integers of any length, one for numbers with finite decimal expansion, and one for all rational numbers. The last one is particularly interesting: it keeps track of the numerator and denominator separately, so that it can exactly represent numbers such as two thirds.

Now if you want to add up two numbers, it's easy and quite intuitive:

You might note that in this API, all three classes ensure immutability - if you add the price of the case to that of the uPad, it returns a new instance with the result, but $uPad keeps its value of 0.7.

And if you compare the result, I finally get the 10% off my new uPad!

Martin Fowler, in his bible Patterns of Enterprise Application Architecture, says this about Money:

A large proportion of the computers in this world manipulate money, so it's always puzzled me that money isn't actually a first class data type in any mainstream programming language. The lack of a type causes problems, the most obvious surrounding currencies. If all your calculations are done in a single currency, this isn't a huge problem, but once you involve multiple currencies you want to avoid adding your dollars to your yen without taking the currency differences into account. The more subtle problem is with rounding. Monetary calculations are often rounded to the smallest currency unit. When you do this it's easy to lose pennies (or your local equivalent) because of rounding errors.

We now have a way to overcome one problem Fowler mentioned: rounding errors. So what about the other one? If you work in a multi-currency setup, you certainly don't want to mix up a strong currency such as credits with a weak one such as US dollars. Imagine sending somebody $699, an equivalent of 0.7 credits for the uPad, and them receiving 699 credits instead. It's certainly nice for the recipient, but not for the bank, and the least for the developer responsible for this.

That's why there is another package in the Brick family: brick/money. As you might have guessed, it builds on top of brick/math and pretty much mirrors its API, adding support for currencies:

Now if you try to apply a $100 voucher, you'll get a MoneyMismatchException:

Another great feature is the ability to use money in specific contexts, the most useful example being cash rounding. For example, in the Czech Republic we round cash to nearest whole crown, while Ireland and Switzerland round to nearest 5 cent. This can be represented using CashContext and again, an exception is thrown if you try to mix such value up with an incompatible one:

Databases are no exception

Another topic we need to discuss is storing numbers in the database. The obvious choice would be FLOAT, wouldn't it? Well, the float in the database is represented in IEEE 754, so it suffers from the same issues as floats in the application codebase. In PDO, it even maps to a PHP float.

A much better choice is the NUMERIC type (also known as DECIMAL). It maps to a PHP string, so it's safe for pretty much any value, and it works with a fixed-point precision. That is both its pro and its con: in some databases, you need to define the precision and scale of the NUMERIC column when creating it, and while not a single world's standard currency uses a scale larger than four, you can easily get to 18 with some cryptos (ethers, namely).

Also, the SQL standard is one thing and its implementations are another. For example in PostgreSQL, NUMERIC without given precision nor scale can store a value of any precision - which is perfect. However, the standard in this case rather impractically implies that the scale is zero and such column can only store integers. Also, the maximum precision of a NUMERIC column differs across database systems. So please be aware of the features and limitations of the particular one you're using.

An alternative approach might be to use a BIGINT column to store the amount in minor units. While it certainly works, one thing to consider is that you cannot immediately tell the scale of the value which might complicate calculations, and again, with some cryptocurrencies (ethers again), you can run into the limits of integer values, even on 64-bit platforms.

That's the overview of how to store numbers. Monetary values, specifically, also need to keep track of the currency. I suggest a CHAR(3) column with the currency code, because it is unique and human-readable at the same time. You can also create a composite type if your database supports it:

Some databases also have a native MONEY type. One example is the SQL Server, another one is PostgreSQL. I only know about Postgres's MONEY type and I strongly recommend not to use it, because everything about it - from the fractional precision to the output format - is determined by the database locale settings, so you might have a hard time working with it from the application.

I believe I've covered everything about working with fractional numbers and monetary values in PHP and databases. If not, feel free to ask further questions, add suggestions and share stories in the comments section below.

I'll leave you with a one last tip: Roave has created a PHPStan plugin that detects and forbids floats in your codebase. That might be a good starting point of refactoring away from floats. You can find it and learn more in its Github repo.

This post took 5 to write.
If you liked it, feel free to buy me one!
Have you found a typo in the post?
Please submit a pull request with a fix :)
More from my blog

Your application needs a clock

Previously, I've discussed working with date and time values both server- and client-side, and I've covered storing temporal data in databases. This time, we're going to talk about telling time.